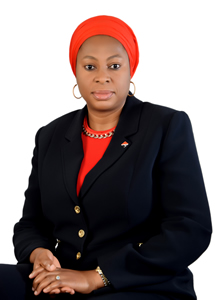 Risikatu has over two decades of banking experience. Her Banking career started with Continental Merchant Bank in Lagos State, where she served as a Youth Corper (NYSC). Then Savannah Bank Plc (1993 to 1999) where she served as an Operations Staff and a Resident Auditor. She subsequently worked in Diamond Bank Plc (July 1999 to August 2015). Her exposure in the banking industry spanned through a number of job functions including Credit and Marketing, Banking Operations, Recovery, Audit and Regional Business in the Northeast.

Risikatu Ahmed is also a Fellow, Institute of Credit Administration (ICA), Honorary Fellow, Chartered Institute of Bankers of Nigeria (FCIB), and a member of the following professional bodies amongst others:

She is an alumna of the University of Pennsylvania, Wharton Advanced Management Program, Harvard Business School and has also gone through leadership courses in Lagos Business School (SMP).